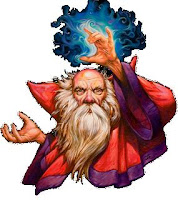 One week from now I’ll be in beautiful Lake Geneva, WI for Gary Con, an annual glorious weekend of old gaming fun. This year I plan on being much more diligent in my day-to-day, on-the-scene blogging. Unlike last year, I’m going to have my laptop at the ready so I don’t have to try to blog using an iOS device.

My schedule of events is as follows:


Buried beneath the sands for generations, an ancient curse has re-awakened in the desert. Livestock and pets, babies and the infirm are missing. You are called upon to set forth and explore these depredations. Then a local seems to remember:" ...there is some sort of ungodly curse..." and a buried temple beneath the sand.

Run by Tim Kask. I’m going to have fun playing a game run by a TSR alumni.


The Ghostbusters are back! After successfully busting the ghosts at Gen Con, they've returned to their beloved NYC for some routine hauntings. Things will be far from routine, however, when they boys in grey are called in to investigate a disturbance at the American Museum of Natural History. Just how does one bust a 40' long t-rex skeleton?


So you've taken crazy jobs before... but you figure it takes a special kind of crazy to take this job. A new race has been discovered, and they've invited a team of UFP representatives to play in something they call, "The Game." You don't know if it's something like checkers, or a violent game that makes neutron-ball look like a pillow fight. But they're paying well. You just hope you and your teammates are up to the challenge.... Pre-generated characters provided.

Run by Ken Haylock. I'm looking forward to playing a session of the RPG that got me into the hobby.

Saturday is going to be my day on glorious Tékumel with two games run by Victor Raymond.

2 PM: The Periplus of the Planes (Empire of the Petal Throne)


Nyélmu the Undying Wizard has set you upon a quest across the myriad planes to retrieve for him certain items necessary to his pleasures in the Garden of the Weeping Snows. Unfortunately, other forces are at work to stop you - Shunned Ones and Hokún possibly the least among them!


If you have never ventured across the River of Silence, or heard the sweet, high chiming of Ssú as they search for their victims, or faced the ghastly sight of ranks of undead defending a darkened shrine, this is your opportunity. Come venture beneath Jakálla, The City Half As Old As The World, the jewel of the Tsolyáni Imperium, the ancient capital of the Bednálljan Kings. Experience the World of Tékumel, created by Prof. M.A.R. Barker. Using classic Empire of the Petal Throne rules with pregenerated characters. (repeated session)

10 AM: A Rock And A Hard Place (Mongoose Traveller)


Your downport liberty on a moon of the balkanized planet Alcost in the Far Frontiers sector has been going well enough, if you don't let the war scare news in the background bother you. But when the trouble does strike, it strikes close to you. Can you get yourselves and the children trapped with you to safety?


When I’m not at these events, blogging, or taking a pipe out of by the fire pit (assuming they’ve brought the fire pit back this year), I’m be available to chat or pick-up games or whatever. Just look for this fat asshole:

See you all there.
Posted by Mark Siefert at 4:36 PM