When I started this blog back in August, I originally intended it to be a general blog on old school fantasy gaming. Well, as time went on, I began to realize that my own personal interests lay elsewhere. While I enjoy the ease and expandability or old school rules and their various retro-clones, the tired and recycled Tolkien/Lewis inspired troupes bore the living hell out of me. As the posts I'm made over the last few months indicate, I crave wilder fantasy settings; from Prof. Barker's Tekumel and the related Humanspace Empires by the Drune, to Al's upcoming Warriors of the Red Planet and Geoffrey McKinney's Carcosa soon to be republished using Jim Raggi's Lamentations of the Flame Princess engine.

What's the point of my trying to maintain the facade that this is a general fantasy gaming blog when so much of my gaming interests lie elsewhere? Therefore, I'm seriously considering re-tooling, re-tasking, and even re-naming No School Like The Old School into a weird fantasy gaming blog.

My question to you is, should I do this or should I keep the site the same?
Posted by Mark Siefert at 11:49 PM 12 comments:

Build your own customizable GM screen.

A couple of months back, I posted pictures of my own custom Humanspace Empires GM screen. Sniderman at The Savage AfterWorld has posted instructions on making your own customizable GM screen with some looseleaf binders, some plastic document protectors and, of course, duct tape.

The finished product looks good. I'll probably try my hand at one as soon as I can scratch up the cash. (Yes, I'm that broke right now.)
Posted by Mark Siefert at 11:31 PM 2 comments:

Lately I've been on an "Old School Renaissance" gaming kick and one of the most interesting projects I've run across is Humanspace Empires by The Drune; a science fantasy game that is set in the pulpy space opera "pre-history" of my favorite fantasy setting. I've had a chance to help playtesting this game and I really enjoy it. Even though there is still a few bugs to work out, Drune has done a fantastic job blending the best elements of the "Classic Fantasy Role Playing Game" with the original Empire of the Petal Throne to create a very playable dark scifi game.

That said, and with all due respect with Drune, the Savage within me will not rest until I have plugged Humanspace into the Savage Worlds engine! Therefore, here is my current PC in a playtest campaign that I'm currently embroiled, parsed into Savage Worlds using Powers and Edges from Slipstream: 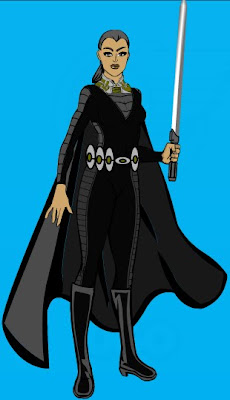 In the academy, Cadet Lálei was schooled in starship mastery and command. Eventually, her psychic abilities came to her instructor's attention and entered into the prestigious School of Special Intelligence were she honed her talents. Upon graduation, Lálei quickly rose through the ranks of the male-dominated Navy through a skillful application of merit and seduction (she had the unofficially-coveted role of "Captain's Woman" on two of her deployments). The Deeds of Glory is her first independent command and she is excited at the prospect for further adventure and advancement.
Lálei is a quiet but ambitious woman who uses her intelligence and sexuality as both a tool and a weapon. She is a fair leader, but is merciless when crossed. Physically, she is small but shapely frame with a dark complication, deep-brown slanted eyes, and long black hair she keeps tied back while on duty. As a legacy member of the Order of the Verdant Sphere, she has the sect's symbol tattooed just above her vulva and will often request the presence of a comely crew member in her quarters to assist her with her "mediations" where she uses her climax as a springboard to reach new states of consciousness where she briefly communes with... something joyous.
Posted by Mark Siefert at 12:17 AM 1 comment:

Jeebus! Has it really been nearly three years since I've posted anything here?
I've been pretty busy over the last couple of years. Work. School. Back shaving.
However, things are looking up for me and now I can finally pay more attention to this and a few other blogs I run.
So keep watching. I'll post new material very soon.
Posted by Mark Siefert at 9:06 PM 3 comments: