Gaming In The Latter Times.


Brett Slocum recently blogged about his intention of running a campaign set in "The Time of No Kings," the period of Tékumelyáni history between the fall of Éngsvan hla Gánga the rise of Tsolyánu and the other "Modern" empires that we all know and love. I also have an interest in exploring other eras of Professor Barker's universe. While I already have some experience role-playing in the Humanspace Era (sniff, sob... DRUNE! WHERE ARE YOU DRUNE!?!?), I'd like to try playing in the mysterous Latter Times, the barbaric, post-apocalyptic period just after Tékumel was thrust into the béthorm (i.e. pocket universe) that imprisons the planet and its peoples:


Small empires and city-states came and went, and over time the various sentient species began to isolate themselves into their own enclaves and in environments that suited them best. This period became known as the Latter Times. It was during this age that some unknown scholar discovered that the mind alone could be trained as a tool. On Tékumel, magic is the skilled use of extra-planar power and it is possible because of the peculiar characteristics of the pocket dimension. The walls between the planes are thin here and with the right talent that energy can be shaped by the power of a human will. It is during this period of declining technology and increasing magic that some of the most exotic artefacts on Tékumel were created. Tékumel’s more outlandish species (for example, Rényu and Voródla) were created during the Latter Times.

To start, I pulled out my copy of the late Guardians Of Order's Tékumel: Empire Of The Petal Throne which has a section on playing in earlier time periods. It says the following about gaming in the Latter Times:


A game set in this period will be radically different from a modern era Tékumel game; even the positions of the landmasses will be different. This is when the first powerful magicians appear as they begin to explore and exploit the new potential of other planar power to affect reality. This is combined with the survival of considerable technological understanding and significant stockpiles of Humanspace-era equipment. This is a Tékumel where the new upstart magicians successfully challenge the old technological order for the first time and weird combinations of magic and science become almost commonplace.

Reminds me of another infamous piece of Sword & Sorcery fiction:

Know, O prince, that between the years when the oceans drank Atlantis and the gleaming cities, and the years of the rise of the Sons of Aryas, there was an Age undreamed of, when shining kingdoms lay spread across the world like blue mantles beneath the stars...

-Robert E. Howard,
The Pheonix on the Sword

(Can't you imagine the Adventures of Thún'dar and his companions: the sensual sorceress Arél and Uk-Lah the Shén? I can.)

Eitherway, the Latter Times sounds like a time of mighy-thewed, coppery-hued barbarians wielding Chlén-hide swords (or uncommon, but not yet rare, steel) wandering the wastes between tiny empires and city-states in search of adventure. Where hordes of Ssú and Hlüss have broken loose from their ancient prisons to raid and destroy the alien interlopers who took their planet many millenia before. Meanwhile, insane scholars, flanked by ornate Ru'un bodygurads and kept entertained by a harem of Yéleth concubines, craft the first Eyes, search for stashes of Humanspace techonolgies, experiment with newly discovered "magics," and make horrific pacts with the Pariah Gods and their inhuman servants.

Sounds exciting? It sure does, but what rules do you use?

Of course, there is always one of the many Tékumel-based RPGs that are still available (and soon to be joined by Jeff Dee's Béthrom, still in development). The GoO rules suggest keeping magical powers restricted to Universal spells and making tem more difficult to learn/cast, while "special items" (i.e. "technological") are more common. With some minor tweeking of the treasure charts and magician/priest skills table, you can do this quite easily.

There are other options of course. You can always start with your favorite verson of the original game or OSR engine (Swords & Wizardry, Labyrinth Lord, LotFP, etc) and borrow what you need from the original Empire of the Petal Throne. As what amounts to a "post-apocalyptic" game you could use Gamma World or Mutant Future, stripped of mutations and associated powers and replaced with Tékumelyáni aliens and monsters. The magic rules in Crypts & Things (aka Akrasia's Sword & Sorcery rules) might be a better fit for Tékumel's non-Vancian spellcasting. I've heard tell that there is this new "Sword & Planet" RPG that might be useful.

There is nothing wrong with a good rules mash-up so long as it works and everyone has fun!

As usual, discussion welcome below.
Posted by Mark Siefert at 12:49 AM No comments:

Warriors of the Red Planet: It's HERE! It's HERE! (at least the beta) 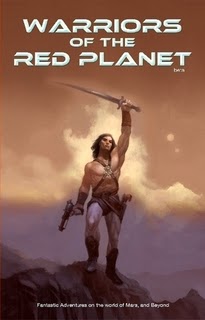 Yesterday, I was so busy spending the day red-faced, screaming, and pounding any available table over the Supreme Court's moronic Hobby Lobby decision, I failed to notice Thomas Denmark's announcement that after years of waiting...


WARRIORS OF THE RED PLANET IS AVAILABLE!!!

Right now the document is a perfect-bound paperback print "Beta" edition available at Lulu.com. The doucment reportedly needs still needs a little and polish but, it should be quite playable. While I while certainly be picking up the print edition, I did wish they had a .PDF we could download right away. I suppose Thomas and Al want to keep control of the document for the time being rather than seeing it plastered on every RPG website.
Posted by Mark Siefert at 1:51 AM No comments: