After finally getting having access to both Interface Zero 2.0 and Wild Card Creator, I decided to put them through their paces by designing my first IZ 2.0 character: A cyborged-up street samurai with timber wolf genes to boot! 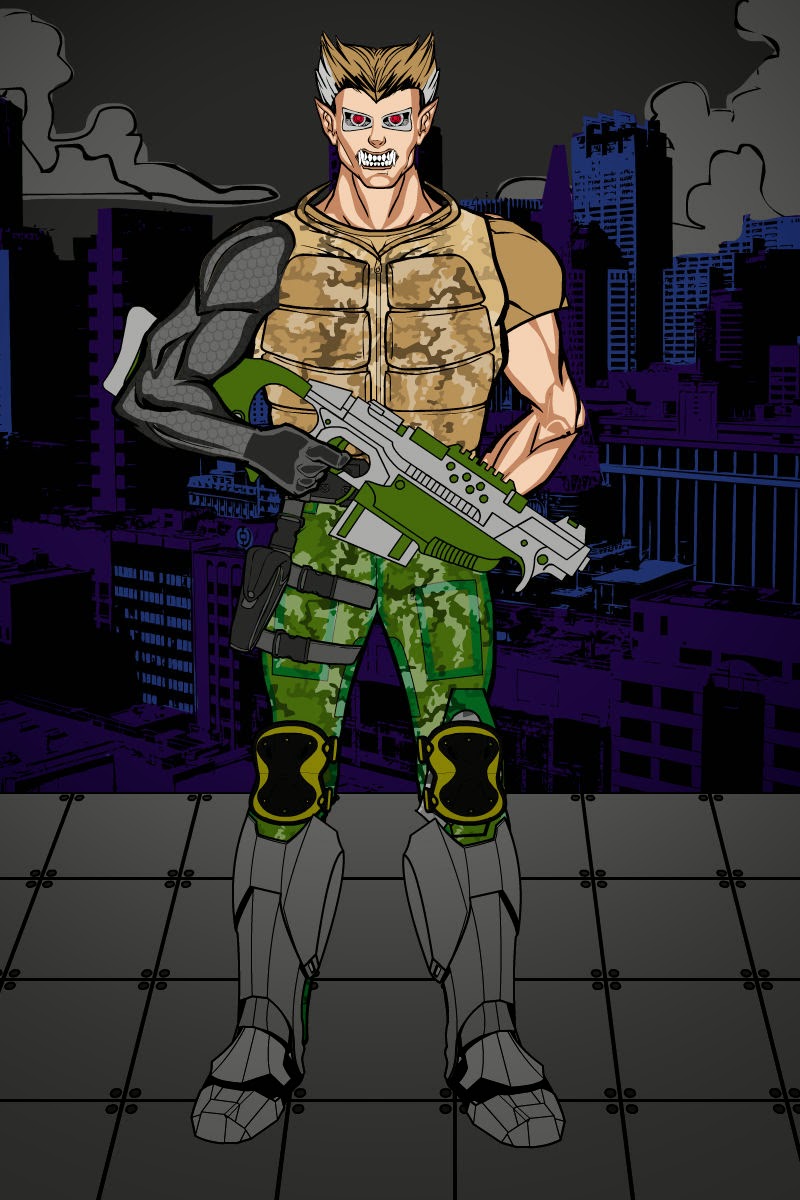 Marcus Slade, grew up in the sprawls of Chicago in the shadow of the corporate metroplexes downtown. While not particularly patriotic or loyal to the Great Lakes Union, he had no love for the racist theocrats of the neighboring North American Coalition (What sane person does?) and joined the  GLU army. Looking for a larger paycheck, and the opportunity to join up with special forces, he opted for transgenic modification. With wolf DNA spliced into his chromosomes he was attached to the 112th Urban Shocktroops (aka "The Berserkers") where he earned the nickname "Fenris." During an assault mission, Slade lost his right arm and both eyes when he was caught by a mortar shell. Patched up with cyber-replacements, Slade was discharged.

Since then, Slade has sold his gun hand to anyone willing to pay. Finding a home in Chicago's Hybrid community, he works as an enforcer for the Vasquez Brothers, a pair of small time hybrid hoods specializing in drugs, gun running, and information brokage that use a huge chunk of their proceeds to protect other hybrids. It was on a run where he met Jasmine "Ixchel" Bravara, a sassy jaguar-hybrid hacker who took an instant shine to the brawny, quiet Slade. The two became fast lovers, using sex to sate their more feral passions. (By the way, only a idiot makes a crack about "dogs and cats sleeping together" in Slade's presence.)


All in all, I'm very pleased with the results. I've always had a soft spot in my heart for the cyberpunk genre. Especially in this day and age with its near-ubiquitous computing and multinational corporate control of politics resulting in widespread corruption, environmental destruction, and rapidly growing economic disparity between rich and poor.

(Update: I played around with Heromachine until I got something that looked MUCH cooler
Posted by Mark Siefert at 1:02 AM No comments:

Properly painted and based, these Star Destroyers would be awesome for space combat games like Starmada or, my all-time favorite, Full Thrust. Please e-mail or post leads below.
Posted by Mark Siefert at 12:41 AM No comments:

Since the Sword & Planet genre is near and dear to my muscular circulatory fluid pump, I've decided to try my hand at adapting the denizens of Barsoom to Basic D&D and related retro-clones. As always, scathing criticism of my hair-brained ideas is always welcome.


Five or six had already hatched and the grotesque caricatures which sat blinking in the sunlight were enough to cause me to doubt my sanity. They seemed mostly head, with little scrawny bodies, long necks and six legs, or, as I afterward learned, two legs and two arms, with an intermediary pair of limbs which could be used at will either as arms or legs. Their eyes were set at the extreme sides of their heads a trifle above the center and protruded in such a manner that they could be directed either forward or back and also independently of each other, thus permitting this queer animal to look in any direction, or in two directions at once, without the necessity of turning the head

The ears, which were slightly above the eyes and closer together, were small, cup-shaped antennae, protruding not more than an inch on these young specimens. Their noses were but longitudinal slits in the center of their faces, midway between their mouths and ears.

There was no hair on their bodies, which were of a very light yellowish-green color. In the adults, as I was to learn quite soon, this color deepens to an olive green and is darker in the male than in the female. Further, the heads of the adults are not so out of proportion to their bodies as in the case of the young.

The iris of the eyes is blood red, as in Albinos, while the pupil is dark. The eyeball itself is very white, as are the teeth. These latter add a most ferocious appearance to an otherwise fearsome and terrible countenance, as the lower tusks curve upward to sharp points which end about where the eyes of earthly human beings are located. The whiteness of the teeth is not that of ivory, but of the snowiest and most gleaming of china. Against the dark background of their olive skins their tusks stand out in a most striking manner, making these weapons present a singularly formidable appearance. ...

But how puny and harmless they now looked beside this huge and terrific incarnation of hate, of vengeance and of death. The man himself, for such I may call him, was fully fifteen feet in height and, on Earth, would have weighed some four hundred pounds.

Barbaric even by Barsoom's brutal standards, the Green Martian hordes are feared by the all the civilized peoples of Mars. With few exceptions, Green Martians revel in violence and cruelty, killing to advance their status in their horde, or just for the pleasure of seeing their victim suffer.Like most lifeforms on water-starved Barsoon, Green Martians hatch from eggs and are raised collectively by the females on a horde. Love and familial bonds are not a factor in the vast majority of Green Martian lives (although there are few exceptions); however, the few exceptions to the rule can be intensely loyal to those who can prove their strength and cunning.

Upon Reaching 9th Level: When a Green Martian reaches level 9, it has the option of becoming a Jeddak of a horde of its own. A Green Martian Jeddak will attract Green Warriors who roam the dead sea bottoms from ruined city to ruined city. They have no use for retainers or specialists.

Swords & Wizardry: Green Martians can only be Fighters.
Posted by Mark Siefert at 8:42 PM 8 comments: