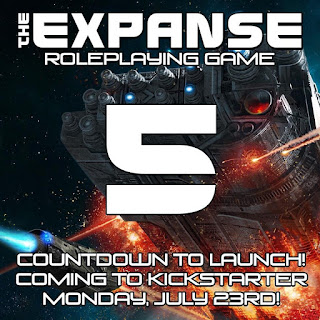 From what Green Ronin has promised, the game will use a modified version of their AGE engine modified for the action-packed, hard sci-fi of The Expanse. So pump up the Juice, and fire up your Epstein Drives, beltalowdas.  Whatever you do, though, DON’T touch any brown goo.
Posted by Mark Siefert at 10:56 PM 3 comments:

Last year I had the opportunity to help playtest Joe Salvador's Eldritch Tales, an upcoming White Box take on Lovecraftian horror role-playing published by Raven God Games. I can't really say much beyond that Joe has put a lot of work into this game and it promises to be hit in and out of the OSR community! Today, Acep Hale with The Lovecraft ezine, a blog dedicated to all things squamous and cyclopean, published an in-depth interview with Salvador about ET, it's inspirations, and what the future holds for his awesome new game.


Could a certain Lovecraftian Sword & Sorcery campaign setting originally intended for Sword & Wizardy find a landing pad for this game? Only the Great Old Ones know.
Posted by Mark Siefert at 9:39 PM 2 comments: