I didn't get out much when I was a teenager. Besides being the official friendless geek of my high school, I had the misfortune of being born to a pair of domineering parents who wouldn't let me learn to drive until I was in college. However, once I had my license, I did my best to make up for lost time by going to all the local game stores my uptight mom and dad wouldn't take me to when I was a kid. One of these stores, Adventures Games Plus in Greenfield, WI, would become my home away from home and its usual crowd would become the crazy, geeky friends and the second family that I had longed for all my life. 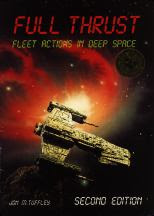 While Adventure Games Plus (or just AGP) catered to all gaming interests, there was very strong miniature gaming clique who'd meet on Tuesdays and weekends to play. There was a group that played Star Fleet Battles each Sunday, and being a fan of old-school Trek, I jumped at the chance to learn. I didn't realize what I was getting myself into. I thought SFB was going to be this fast-paced game of space combat. What I got instead were hours of energy allocation accounting and slogging across a hex map. My young ADD-addled mind rebelled at the codified dullness of the rules and the dichotomy of how could something that looked so cool could be so boring. After a game where a single impulse took four hours to resolve, I had all but given up on miniature gaming. Then I found out about a little game called Full Thrust.

Full Thrust was everything I was looking for in a space combat game. It was fast and easy to learn, you could field large fleets of ships, and it was generic enough to be used for just about any science fiction setting: Star Trek, Star Wars, Babylon 5, and many others. Tuesday nights became the night of the week I lived for. It was the night that I would meet with my growing group of friends with our fleets of miniature ships and pit them against each other in white-hot science fiction battle. This was the time I started to learn to paint figures, where I started to learn basic tactics, and

I was in college at the time (circa 1994) and one of my professors mentioned the existence of this strange new computer technology called "the Internet" and the "World Wide Web." Discovering an online community of FT fans on an e-mail discussion group, I started to make connections with players across the planet, including the game's author, Jon Tuffley of Ground Zero Games. I soon discovered how easy it was to create your own web pages, and using a basic HTML reference and a share of server space on the University of Milwaukee--Wisconsin I started an online resource for players. Thus, The Unofficial Full Thrust WWW Page  (i.e. UFTWWWP) was born.

About that time, I met Gina, a girl who seemed interested in my strange and esoteric interests and we struck up a relationship. I was able to convince her to play FT and despite not knowing anything about tactics she always beat me. (No, I didn't let her win!) She and I attended my first Gen Con together when I found out there was going to be a large group of FT players running events. Back then, Gen Con was run in Milwaukee so attending only entailed a 20-minute drive into town. Even better, Jon Tuffley was flying in from Great Britain to attend. Gina said I was like a kid in a candy store, and after a whole day of gaming, I vowed to make keep making the annual pilgrimage and run game of my own.

After that, I started running convention games. Being the mid-90s, my sci-fi media obsession was Babylon 5 and I nearly swooned when Agents of Gaming came out with their Babylon 5 Wars line of miniatures. For one of my favorite con games, I got ahold of the Monogram model of the Babylon 5 station itself along with several Omega Class Destroyers and Hyperion Class Heavy Cruisers and created a scenario based on the epic battle in the B5 episode "Severed Dreams." It was always a sellout game.

Sadly, local interest in FT began to wane by the late 90s, especially when the official "Fleet Books" series was released. Gina dumped me about a year-and-a-half and I haven't found a gamer girlfriend (or any other for that matter) since. While I found the brand new ship construction rules to be open up new possibilities, my friends found them too constraining. Eventually, my friends moved on to other games. Full Thrust became something I could only play at Gen Con. The final blow was the fateful day when it was announced that Gen Con would move from Milwaukee to distant Indianapolis. Being an impoverished nerd, working a series of low-paying office jobs, even a weekend in a cheap hotel was a cost I couldn't bear. I haven't played Full Thrust since around 2004.

Science fiction was moving on too, as many TV space operas began to finish their series and science fiction was moving to less expensive, SFX-lite conspiracy dramas. I lost the password to the UFTWWP and owners of the homegame.org server aren't answering my e-mails, I've been unable to update the page since 2005. I've often thought of moving it to a new site, but there was something always comes up to distract me.

However, I sometimes hear the siren song of my favorite miniature game. I still collect and paint starship miniatures. The rules are still available for free from Ground Zero Games website. There is still an active Full Thrust fan community online. The only thing I lack are people willing to play. Maybe it's time to dust off the figs and make an effort to bring the game back to life.
Posted by Mark Siefert at 9:53 PM 11 comments:

I was never very big on conspiracy theories—at least, believing in them, that is. Being a skeptical and scientifically-inclined person, I always figured that they were merely a way for people who had little understanding of how humanity worked and a lot of paranoia tried to explain the world. As a result, I was never into TV shows like The X-Files or Dark Skies. Whenever anyone starts to ramble on about how the Military-Industrial Complex were responsible for the Kennedy assassination, I roll my eyes and try to change the subject. When I hear some self-proclaimed "contrarian" claim that the moon landing is a cunningly contrived hoax, I look for a way to disengage from the conversation. When I hear some Grade-A-loonburger-with-a side-of-fries rant about how the Jewish Bankers are trans-dimensional lizard-men out to summon demons from GMO corn chips, I slowly start to back away to the nearest exit.

Between a depressing death toll of beloved artists and celebrities, and a contentious election year that culminated in the most "WHAT THE FUCK?!?!" outcomes in American political history, 2016 has got to be one of the suckiet years in recent memory. Throw in a crappy job with an insane schedule that drags me in for mandatory overtime, stress and anxiety issues, and the death of another laptop, and you don't feel all that creative.

Sometimes, it's jut better to take a step away for awhile. Which I did.

And now I'm back.

I've got a few ideas bouncing around in my ADD-addled excuse for a brain, and the time has come for me to express them. I've fallen head-over-heels in love with the new edition of Delta Green and it's smartly streamlined mechanics. I've got some ideas I'd like to share here. Also, expect to see some more Mu-related activity as well as some more miniature pics as my painting has picked up lately. I've also discovered 3D printing, so I'm churning out various models and do-dads that are suitable for gaming, so expect
Posted by Mark Siefert at 10:33 PM 2 comments: Posted by Mark Siefert at 10:23 PM No comments: