About this new “TSR” that supposedly been launched... 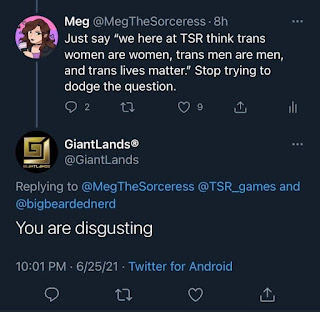 Posted by Mark Siefert at 9:33 PM No comments:

Hey all. It's been a while. I hope you're all doing well in the dystopian Hell that is 2020 CE. Speaking for myself, I've... OKish. I've been busy with work and few other projects and in that time, I've been rethinking the direction of this blog.

Since starting this venture, I've mainly written about the OSR and classic RPGs. Eventually I folded in the material from my previous Savage Worlds and Traveller blogs along with some infrequent posts on miniature gaming. However, over the last year, I've been wondering if my scope has been too narrow. It's becoming harder and harder to write about classic gaming lately, especially since the OSR has waned in popularity. I think that my blogging would be far more frequent if I didn't constrain myself to just one topic.

So, in the next few weeks, expect to see some changes to the look and even the name of the blog. I'll be expanding the scope of material where I'll be writing more and more about contemporary RPGs I've playing as well as greater emphasis on miniature wargaming.

See you all later.

Posted by Mark Siefert at 10:45 AM No comments:

If you have a hot gaming product that you'd like a honest, review by a veteran role-player and miniature wargaming who's work has been published in Pyramid magazine, please let me know.  I need some excuse to post on stuff on this blog.
Posted by Mark Siefert at 7:31 PM 8 comments:

Let's head into the new year--and a new burst of productivity--with some new material for Mu using the Eldritch Tales rules involving the terrible god of Mount Yaddith-Gho, Ghatanothoa.


Sight of the god, or its image, as all the legends of the Yuggoth-spawn agreed, meant paralysis and petrifaction of a singularly shocking sort, in which the victim was turned to stone and leather on the outside, while the brain within remained perpetually alive—horribly fixed and prisoned through the ages, and maddeningly conscious of the passage of interminable epochs of helpless inaction till chance and time might complete the decay of the petrified shell and leave it exposed to die.

--H. P. Lovecraft and Hazel Heald, Out of the Aeons

The poor wretches unfortunate enough to gaze upon the fell form of Ghatanothoa, the God of Mount Yaddith-Gho, are doomed to to a grisly fate of living death. Their still-living brains trapped in a prison of desiccated and petrified flesh and bone. However the priests and sorcerers devoted to the Mountain God have found a use for these poor souls.

Created by the spell "Awaken Slaves of Ghatanothoa" (see below), these shambling creatures obey the commands of the caster without question or pause. Their leathery skin and sinew make them exceedingly tough, and the tips of their shriveled fingers are razor sharp. Worse, someone wounded by these talons must make a saving throw or they themselves will surfer Ghatanothoa's Cruse, becoming a petrified mummy within 1d3 rounds. Anyone seeing this horrific transformation must make a saving throw vs. insanity or gain 1 insanity. Only very powerful magical intervention can save the victim from this end.

Spell Level: 5
Learn Spell: -2
Casting Time: 2 Rounds
Spell Check: Intelligence -2
Range: 20 ft.
Duration: Permanent until broken.
Failure: All Slaves within the spell range awaken and attack the operator until either the Slaves or the operator are slain.

This spell activates all dormant mummies petrified by Ghatanothoa's Curse within the range of the operator. The awakened Slaves will obey the operator until they are destroyed or willingly released by the Operator.

So T’yog wrote his protective formula on a scroll of pthagon membrane (according to von Junzt, the inner skin of the extinct yakith-lizard) and enclosed it in a carven cylinder of lagh metal—the metal brought by the Elder Ones from Yuggoth, and found in no mine of earth. This charm, carried in his robe, would make him proof against the menace of Ghatanothoa—it would even restore the Dark God’s petrified victims if that monstrous entity should ever emerge and begin its devastations.

--H.P. Lovecraft and Hazel Heald, Out of the Aeons


Created by T'yog of K'naa, the ancient Naacal sorcerer-priest of Shub Niggurath, this powerful amulet can protect the bearer from the petrifying effects of Ghatanothoa's Curse. Also, if touched to the Mountain God's mummified victims, the amulet will restore them to full life and vigor. However, depending on how long they've been cursed, their sanity might not be intact.

As far as we know, only one of these potent talismans were ever created. It was stolen by T'yog's rival, Immash-Mo, the High Priest of the Temple of Ghatanothoa, and is believed to have been lost with the destruction of Mu.
Posted by Mark Siefert at 9:57 PM No comments:


OK, I'm done with all this moping around. Time to down a fistful of Adderall with a Red Bull chaser and do some blogging!
Posted by Mark Siefert at 5:47 PM 1 comment: 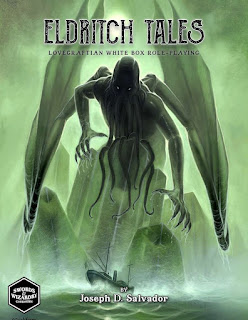 Until then, Happy Birthday HPL!
Posted by Mark Siefert at 8:38 PM 3 comments: 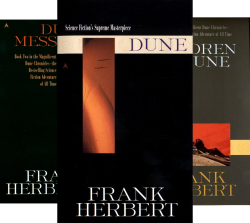