Here's a player character I've been working on for Deadlands: Reloaded. 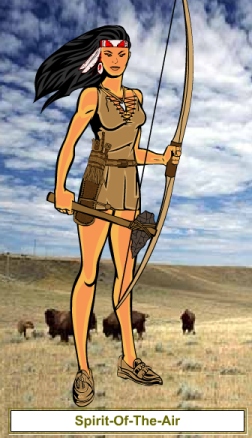 Background: Since a young girl, Spirt-Of-The-Air has shown that the nature spirits where with her. Going against tribal tradition, Spirit was taught the great medicine to help heal and protect her people. Although she was betrothed to Running Eagle, another shaman, her heart belonged to Sharpened Stone, a brave who she had grown up with. When she discovered that her husband-to-be was a Ravenite, she exposed him to her tribe's elders. Before he could be executed, Running Eagle escaped and returned with other traitors armed with fire sticks and iron weapons. After overwhelming her tribe's camp and killing the rest of her people, Running Eagle tied her to a pole to left her to die of hunger and exposure. She escaped her bounds and on the grave of her lover she swore would use her powers to help oppose Raven and followers.
Posted by Mark Siefert at 8:48 PM No comments:

Welcome to The Savage Blogger, a web log dedicated to the Savage Worlds role playing game by Pinnacle Entertainment!

I had been following the development of Savage Worlds since 2003 when I heard that Pinnacle was taken it's "Great Real Wars" wargaming rules and using them as a basis for a role-playing game. Having enjoyed GRW, I was intriqued. I picked up the first Savage Worlds game after it's release, and I've never regretted it. Right now, I'm trying to get my RPG group interested; I've already tried one game of Deadlands: Reloaded and there is talk of giving Slipstream a try. I'm also interested in Shaintar, Ravaged Earth, and--when they come out--Realms of Cthulhu and Mars. I'm also working on some material of my own that I want to try out. (Who knows? I might roll the dice and see if I can get them published.)

Here I intend to post reviews, setting musings, game reports, news tidbits, characters, and anything else that would be of interest to a SW fan. If you have any ideas of your own, don't hesitate to e-mail me at siefertma@wi.rr.com.

In the meantime, hold on Savages, it's going to be quite a ride!

Posted by Mark Siefert at 7:17 PM No comments:

A few years ago I heard about a

Posted by Mark Siefert at 7:08 PM No comments:

Traveller and the "State Of the Mongoose" Address.

Matt Sprange, grand guru supreme at Mongoose Publishing, released this year's "State Of The Mongoose" address and there are some great things in store for Traveller fans in 2009:

Posted by Mark Siefert at 1:16 AM No comments:

Sorry, I've been neglecting my Traveller blogging duties, but life has been... sigh.