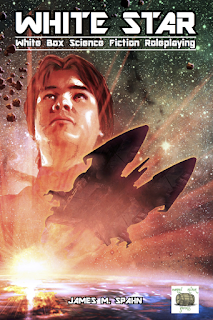 A while back, I mentioned that my first RPG (i.e. Star Frontiers) was a science fiction title rather than a fantasy game like all the cool kids were playing. I was one of those poor schmucks who were dealt easily-duped right-wing parents who bought into the Satanic Panic of the early-mid 80s, so D&D and other fantasy games were verboten in my family's household. However, sci-fi games were accepted grudgingly. I assume my mother didn't think I'd be summoning any demons from the deepest pits of Hell with a copy of Palladium’s Robotech or Cyberpunk 2020 (although I was able to sneak Call of Cthulhu past them). Therefore, since I spent most of my adolescent gaming years blasting aliens and leaping across galaxies, science fiction games have a special place in my muscular blood pump.

That's why I was particularly excited when James Spahn of Barrel Rider Games announced the publication of White Star, a new OSR science fiction game using Matt Finch's Swords & Wizardry: White Box engine. There are many sci-fi games with an old school flavor: Stars Without Number. Starships and Spacemen, X-Plorers. However, White Star is meant to be a more direct restatement of the Gygax/Arneson rules specifically for the science fiction genre.

Fans of White Box will have no problem digesting the rules and they are easy enough for the neophyte to jump into without headache. In White Star, damage and hit dice are d6 based, and most of the time the only other dice you'll need is a d20. All characters have a single saving throw and there is the option to use either descending (THAC0) or ascending armor class for combat. White Star is also designed to be 100% compatible with White Box so if you want to attempt a sci-fi/fantasy mash-up like the classic Expedition to the Barrier Peaks module or settings like Dragonstar or Amethyst, you should be in excellent shape.

The classes in White Star cover a wide array of established sci-fi character archetypes: Aristocrats are your leaders and negotiators, lending a bit of social gaming amidst all the blasting and hacking. Mercenaries are your basic fighters. Space Knights defend peace and justice in the universe with star sword and psionic “Meditations” (i.e. think Vanician spells). Pilots are daredevils who can coax your starship to perform gut-churning maneuvers while keep their ships in space. Like Elves, Dwarves, and Halflings, aliens and robots are treated as race-as-class, and they are generic enough to fit whatever setting you desire. There is an Alien Brute class if you want play a hulking non-human warrior, and an Alien Mystic with their own supernatural “Gifts.” Robots can be designed as diplomats fluent in over six million forms of communication, repair and maintenance models that can be useful that hyperdrive or shutting down garbage smashers on the detention level, or hulking combat 'bots programmed for destruction.

White Star features comprehensive equipment list that features everything from communicators to mono-swords, stats for starships as well as simple rules for ship-to-ship combat and operations, and even bionics if you want your campaign to have a more cyperpunk feel to it. There's also a bestiary featuring alien adversaries and monsters ranging from ravening space bugs to assimilating cyborgs. A chapter is devoted to the various campaign styles that the rules would work for, and there is even an introductory adventure for Level 1-3 adventurers, something not a lot of OSR titles include.

Do the various classes, monster's and other tropes seem derivative. Sure, they're pretty much total rip-offs, but you can say that about any modern fantasy role-playing game. If anything the familiar settings and adversaries gives the players and GM a common frame of reference from which they can modify the game to suit their own campaign. When and if I were to run a White Star game, my setting would be slightly grayer than a Star-Wars-style universe. The generic Galactic Empire would be far less tyrannical, rebels would be factious and indiscriminate in their violence, nobles houses would play a bigger role, and the Space Knights would not be cold, emotionless monks with energy blades with a weird disdain for ranged weapons and sex. It's ultimately all up to you.


It's easy to see why White Star has in the span of a very short time (Less than a week!) gained an enthusiastic following. It's already “Electrum” rated on RPGNow and in the Google+ community there is already talk of two fanzines being started. Like all OSR games, White Star's simplicity and open-ended, do-it-yourself nature encourages gamers to get creative. In a hobby that is supposedly fueled upon imagination, that is always welcome.

White Star is currently available on RPGNow.com and DriveThruRPG.com as a .PDF for $9.99. Print-On-Demand copies are expected to be available by the end of the month.
Posted by Mark Siefert at 1:28 AM No comments: 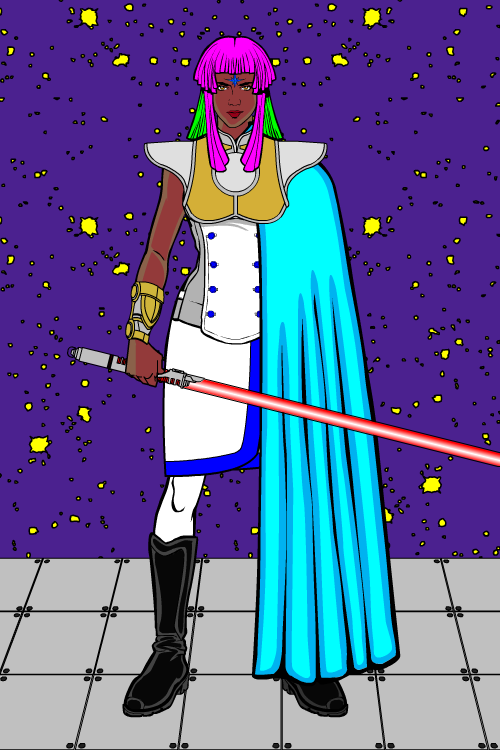 A scion of the Dreen lineage of the Rising Star Order, Kay'Lanna has just earned her knighthood and vowed fealty to House Salzor of Caldor. As a novice knight of House Salzor's cadre, Kay'Lanna has been assigned protection detail for Lady Almada's ne'er-do-well son Feldan as he leaps across Imperial space in search of adventure. While Feldan is brash and reckless, Kay'Lanna is a loyal knight and will do her duty to keep the party-boy lordling in line and out of trouble as he hones her own skills.
Posted by Mark Siefert at 12:02 AM 1 comment:

As I briefly touched upon in my last post, James Spahn of Barrel Rider Games has been cooking up White Star, a new OSR sci-fi game using the Swords & Wizardry: White Box engine. Just yesterday, James announced that the .PDF will be released on RPGNow/DriveThru on May the Fourth.

Hmmmmm... I wonder if there is some significance to that date?

White Star promises to feature new classes. robots and aliens, science fiction hardware, starships, cybernetics, and much, much more. The game is also supposed to be completely compatible with S&W:WB so you can easily play high fantasy/science fiction mash-ups like Expedition to the Barrier Peaks, Dragonstar, or Amethyst. The PDF will retail for $9.99 with a PoD digest (6" x 9") edition in both softcover ($14.99) and hardcover ($24.99) coming out as soon as James okays the proofs. Preliminary reviews appear very positive. James has also wisely started a Google+ Community to give players a place to discuss the game as soon as it drops.

You will be able to read my review here as soon as I get my hands on a copy!
Posted by Mark Siefert at 1:29 AM No comments: