Excuse me, I need to rant a little bit.

The last year hasn't been very good to me. I lost my job last summer and despite my education and experience I can't seem to get hired, much less interviewed, for even the most menial of jobs. I'm beginning to worry that returning to school--and consequently running up thousands in student loan debt--to peruse a career in computer programming was a wise choice. I've got bill collectors hanging on the bell and my piddly unemployment checks aren't helping cover my bills. I keep waiting for the next shoe to drop; cancer, heart disease, or some other massively expensive medical condition that would send even the most well-insured individual into a lifetime of debt or bankruptcy.

As a result, I haven't done as much gaming as I'd like to as I wallow in depression. anger, and a fruitless search for a new job. I haven't been able to afford to go to any of the major conventions and it looks like that's not going to change anytime soon, if ever. I was looking forward to going Origins and "Savage Saturday Night" again this year, but that dream was shattered each time I received a letter from a respective employer telling me that I don't even warrant an interview. Even an evening at the friendly local game store is getting prohibitively expensive; gasoline, food, incidentals, etc..

And all of my ideas for campaigns lay fallow as well; a Realms of Cthulhu campaign where the PCs play mobsters as well as my Lovecraftian Dark Fantasy setting, my attempts to create playable (and possibly marketable) Savage Worlds rules for Tekumel, playtesting Totems of the Dead, running Space 1889: Red Sands, etc.. All of these cost time, money, effort, and enthusiasm that I no longer have access to. It's hard to get excited for anything when you're constantly worried whether or not you're going to end up living in a cardboard box by the end of the month.

I don't know that the Hell I'm going to do and I shudder when I think of what lies ahead. I don't want to hear maudlin reassurances about how things are "going to get better." because they're not. If anything, things are going to get a lot worse. So, "good bye" civilization and "hello" long, slow, slide into extinction. It was fun while it lasted.
Posted by Mark Siefert at 10:55 AM 5 comments:

Get back ye Foul Furries and Horror Movie Onanists!

So writes the self-proclaimed Judge of Role Playing Game Morality, so shall it be done!


"He is right in his assessment, but wrong in his morality."

I'm still wondering who the fuck made you the ethical arbiter of the role playing industry or the OSR. It certainly wasn't me, and if I had to vote for one, you wouldn't be on my list of choices, Greg.

"But the tempo of the past few days has been to cast me as some kind of censorship hound. Which is absolutely false. I am just saying that I think hooliganism is bad for sports and LOTFP: GE is bad for RPGs."

"It is bad for the same reason that Furries are bad."

Yikes! First dark fantasy role playing games with dirty, dirty pictures are the scourge of Western Civilization, now anthropomorphic animal fetishists are equally reprehensible because you think they are not the One True Faith of Cosplay? Would you care to front load your insane list of moral heresies so we can keep track of how much of an uptight loon you really are?

"Now if D&D really was Satanic and Satan was real and it really was a threat to your immortal soul, then maybe D&D really did pose a threat to the earth. But it doesn't. I know it doesn't. You know it doesn't. Hence, wrong. And if roleplaying was really all about telling stories about medusa's fucking people and turning them to stone and demons climbing out of bloated vaginas, then I guess LOTFP: GE would be a great thing. It would get the word out about RPGs. But it doesn't. That isn't what RPGs are about."

And what, pray tell, oh great moral sage, are RPG's supposed to be about? In your screeds you keep shrieking about how LotFP and Vornhiem have violated some "social contract" or some set of "standards" that only seem to exist in your prudish imagination. This crusade you've decided embark upon is not about the image of RPG industry or the OSR. This is about YOU and how YOU think people ought to behave.

"But you have to accept that you are in a box."

No, we don't. Especially when self-proclaimed defenders of "decency," like yourself, try to stuff us into one.

Wow! First you presume to tell us what is proper thinking when we play RPGs, now you're pontificating about the content of our sexual fantasies?" The word "arrogant" doesn't even begin to cover you attitude, Greg.

"Now when I get back on Monday, this shit is over for me. Dead. Finito. I have had it with trying to discuss this with you people."

That is, until Jim Raggi publishes Carcosa or some other game designer comes out with something that hurts your tender, Victorian, moral sensibilities. Here's a thought, why don't you start a retroactive campaign of moral indignation against Empire of the Petal Throne? While it wasn't as dark as LotFP, this Old School classic features slavery, human sacrifice, social nudity, polyamory, deities devoted to sexuality (some of it sadomasochistic) and sacred prostitution, necrophilia, pederasty, sex with aliens, sex with androids, sex with inter-planar demons... you get the picture?
Posted by Mark Siefert at 9:52 AM 1 comment: 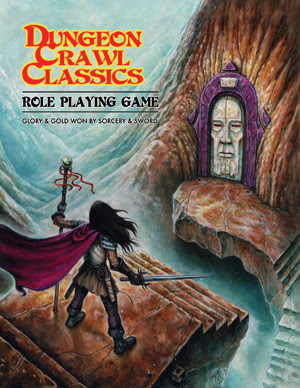 Unless you've been hiding under a drunken dwarf, you've probably heard that Goodman Games has released a free, open-beta set of rules for their upcoming entry into the OSR genre: Dungeon Crawl Classics Role Playing Game. After downloading the .PDF I took spent the afternoon browsing through the rules. My thoughts:


I'd like to give the rules a whirl, but right now it's very hard for me to get any of my friends to take a chance on something new. If anyone knows of any online games going on, please let me know.
Posted by Mark Siefert at 11:44 PM No comments:

Email ThisBlogThis!Share to TwitterShare to FacebookShare to Pinterest
Labels: Review

While browsing the various gaming blogs I came across Dave Morris and Jamie Thomson's Fabled Lands and their lost continent/science fantasy setting, Abraxas. Being a connoisseur of wild and different role playing settings I was instantly sucked into their world of teleporter gates, terror bird riding warriors, psychic magic, and other strangeness. I dropped him a comment asking if they had any plans to publish Abraxas as an RPG setting, either for their upcoming Fabled Lands RPG or another system. Dave Morris responded:


We did think about publishing an Abraxas RPG using my Tirikelu rules system, SM. Tirikelu was originally created for Tekumel and should make a good fit. But, as a dedicated Tekumel player, I have seen how the gaming public prefer "medieval America" as a fantasy setting and so I suspect the level of interest in such a project would be miniscule - unfortunately.

I can only assume that this"medieval America" setting that Dave is referring to the standard, much-recycled, Tolkien-esque setting used just about every fantasy role-playing game from the White Box to Pathfinder: A feudal (sometimes with Renaissance touches) pseudo-European world with elves, dwarves, halflings, clerics, liche lords, chromatic/metallic dragons, etc. We've all played them and they were all of this was great fun...

...when I was 15-years-old. I'm 36 years old now, and the whole archetypical fantasy setting has gotten very, very old.

I can't blame Dave for his reluctance to take a chance with Abraxas in the current gaming market. After all, the artist proposes, but the consumer disposes. However, I think his comment on "medieval America," speaks volumes about gamers and the gaming industry.

We've all noticed how Hollywood has been consistently turning out nothing but sequels and remakes with very little that can be called "new" or "original." Movie and TV writers and producers have found what will draw in viewers and they aren't about to risk millions on a concept that could flop. Sadly, despite it's reputation for "creativity," the same for the gaming industry. They found their "formula" and they since their purpose is to make money, they will slavishly follow it. From time to time you'll get a truly weird and wonderful settings like Tekumel, Journe,  Talislantia, or Carcosa but these setting are largely ignored by all but a niche community. Capitalism is about making a profit, not creativity.

However, it's a bit of cop-out to lay the blame solely at the feet of game designers. After all, they are merely responding to the demands of the gamer. They want the same-old-same-old fantasy game. However, while these settings are safe and familiar, they tend eventually to breed stagnation. I got out of fantasy gaming for well over a decade because I was sick of traditional setting paradigm. I didn't get back in until a fellow online gamer introduced me to Empire of the Petal Throne and my interest in the genre was rekindled. Most won't be so lucky. They'll leave the hobby and slowly and surely, role playing games will fade away entirely.

For the sake fantasy gaming, I think it's about time that fantasy gamers dare to try new things, new worlds, and new concepts. That means we have to leave our safe comfort zones of traditional fantasy and start adventuring in new and uncharted territories, Whether it's Tsolyanu, Barsoom, or Abraxas.
Posted by Mark Siefert at 11:13 PM 4 comments: