Posted by Mark Siefert at 11:27 PM No comments:

While I've got my own face-to-face bi-weekly Traveller group that meets in an undisclosed location somewhere in the state of Wisconsin, every two weeks just isn't enough! That's why I'm going to start a second group that will meet at Adventures In Gaming in Milwaukee.

I'm shooting for Wednesday or Thursdays starting 6 pm and running to 10-11 pm, Sunday afternoons are also an option. We'll be using the new Mongoose version of the Traveller rules. For more information, contact me directly at siefertma@wi.rr.com. I'll also post other fliers at the store.
Posted by Mark Siefert at 4:55 PM No comments:

Email ThisBlogThis!Share to TwitterShare to FacebookShare to Pinterest
Labels: Announcment

Here's my latest character for an upcoming campaign:

Yaralaklaa Hruth was born to a prosperous merchant family on the bustling Imperial Way Station of Junidy (Spinward Marches, Aramis, B434ABD 9 S). After she lost her father to corsairs, Yaralaklaa swore that she would do what she could to help clear the spaceways of piracy. When she was of age, she joined the Navy where her dexterity and quick mind made her a prime candidate for gunnery. She distinguished herself in battle many times, becoming a crack starship turret gunner in the process. Along the way, she met, fell in love with, and took a respectable merchant pilot, A Raggathresh Brarak, as her mate. After finishing her final term in the navy, she rejoined her husband where to the two look to their future.... whatever that maybe.

Andrew Boulton has created a series of well-made Traveller-related mini-movies. Here's a clip you can send to your friends to get them interested in the game:

Posted by Mark Siefert at 10:57 PM No comments: 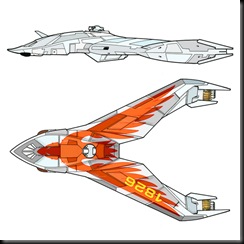