It's time to clean up my act.

You may have noticed that I removed the adult content warning from this site. I also took down a previous post that featured a model in a state of undress. After careful consideration, I came to the conclusion that using such material was both unprofessional and not at all welcoming for female readers. It's one thing to have a liberated attitude about sex, it's quite another to be an ass about it.

To all those whom I offended, I am sorry.
Posted by Mark Siefert at 9:15 AM No comments:

As the Kickstarter goodies for Nova Praxis: Savage Worlds Edition keep rolling in, I tried my hand at creating my first PC for this transhumanist sci-fi setting. It could be a very involved process depending on what sort of character you want to create, perhaps more so than creating a PC for Interface Zero 2.0. You get to create your PC au naturel then, depending on the character's "state" (i.e. Pure, Sleeved, or Sim) you then get to upgrade your body accordingly and there are a lot of great augmentations you can use to customize your PC's "sleeve." I decided to create a sleeved Coalition spy/assassin uploaded into a totally synthetic "cybersleeve."

As usual, thanks go out to the folks behind HeroMachine 3.0 for helping me compensate for my lack of artistic talent.

Note: all stats in parenthesis are for the PC's sleeve. 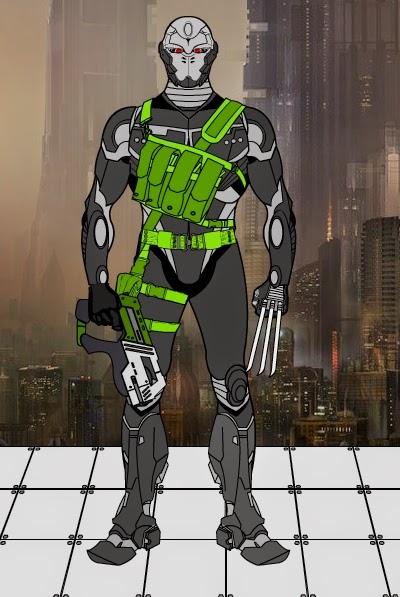 Whoever he or she was before hir Apotheosis, "Janus" is a mystery. This newly appeared contract killer prefers to keep their nearly all aspects of hir identity a secret. Janus prefers the anonymity of cybersleeves, even going so far as to adjust hir sleeve's vocoder to produce an entirely androgynous voice. Janus approaches hir profession with ruthless efficiency making hir not the most friendly of companions. To help compensate for the muted existence of life in a cybersleeve, Janus indulges in promiscuous virtual sex during hir downtime. Keeping to hir sexually ambiguous nature, Janus will often alter gender and and orientation; male or female, hetero or homosexual, it doesn't matter. Unfortunately, Janus menomic core has picked up a few annoying trojans and viruses during hir VR trysts, but, so far, nothing serious.


UPDATE: Realized I miscalculated on the skills and had to lose the Licensed edge to increase my Spirit, which meant I had to rethink my Gear and my sleeve's augments. Then I updated my picture.
Posted by Mark Siefert at 1:35 PM No comments:

Sorry for long the unannounced silence folks, but I haven't been feeling very chatty or creative lately. The last few months have been draining: work pressures picked up,; I got slapped with another bout of depression; my mother lost her house, had to move to an senior apartment, AND had get her shoulder replaced; been trying (largely unsuccessfully) to restart my  local OSR group; and I was told by my doctor that if I didn't started losing some weight I would end up with Type II Diabetes and a liver that's turned into foie gras. So after several months of putting up with the drudge of a thankless job (more on that in a bit), hiking large heavy boxes of junk from place to place, sitting in a crowed game store full of 5e players trying to run B/X game that virtually no one pays attention to, and doing all this on half-rations while counting every single calorie that passes my lips, I 'm ready to start posting again.