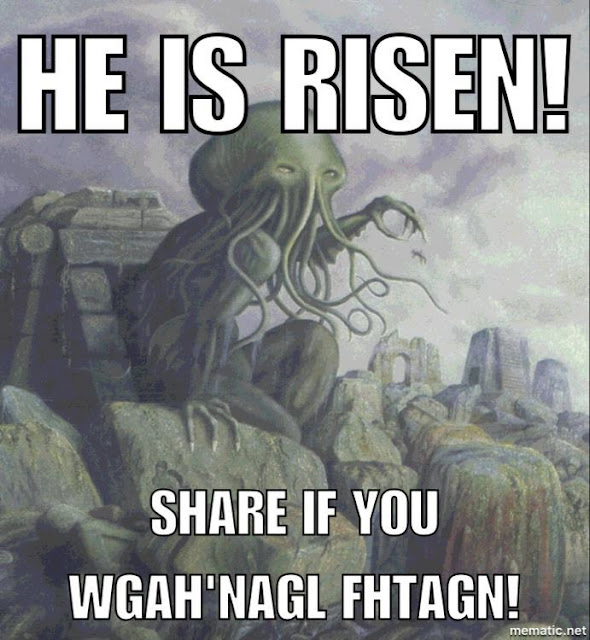 Posted by Mark Siefert at 12:24 AM No comments:

Sorry for the silence. I seem to have brought home some Con Crud from Gary Con and I been pretty tired the last few days. I have a belated report on all the fun I had in Lake Geneva in a couple of days.
Posted by Mark Siefert at 11:45 PM No comments:

As I do each year, I made half-hour trip to Lake Geneva to pick up my badge. Once again, I drove through the rolling, snow-covered hills of southeastern Wisconsin's Kettle Moraine, this time to a new destination: The Grand Geneva Resort. In previous years, Gary Con had taken place at The Geneva Ridge Resort, but it seems that this convention is moving up in the world. Long ago, Grand Geneva had been a Playboy Club where two of the original Gen Cons took place, now it is Lake Geneva's largest resort.

After navigating the palatial resort grounds, I picked up my badge and took a quick walk around the facilities to get my bearings. I was used to the Ridge, but Grand Geneva truly dwarfs the former in both size and style. I shudder to think what the rooms cost per night, even with convention rates.

Afterward, it was off to Sharon, WI for the annual party at Frank Mentzer's lovely house. Frank and his wife Debbie were, as ever, gracious hosts and everyone who came was treated to all manner of baked goodies from their well-appointed kitchen. I ran into many familiar faces and more than a few new ones graced the gathering. Frank treated us to an exhibition of his classic TSR wargaming materials, including vintage copies of Chainmail, Boot Hill, and an impressive number of the ill-fated "Warriors of Mars" game.

Around 10, my belly full of Italian beef and homemade Red Box cake, I said my farewells, hoped into the car and drove back to Muskego to grab some sleep before the big day.


Posted by Mark Siefert at 2:14 PM No comments:

It's the most wonderful time of the year! Yes, Gary Con starts tomorrow and this year I thought I'd take a break for GMing so I can take in the sheer joy of playing. As usual, events registration had a few technical hiccups, but I got everything I wanted. As usual, I'll try to keep you posted on the all fun and frovilics I encounter at what has become my favorite game concvention.
Posted by Mark Siefert at 11:07 AM No comments: