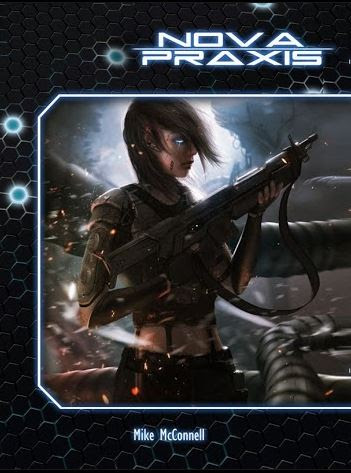 Back in January, I reported that Mike McConnell with Void Star Studios was going to port his hit science fiction setting, Nova Praxis, to the Savage Worlds engine. With Shaintar-creator Sean Patrick Fannon was brought in to write the setting-specific rules. To help fund the project, a Kickstarter campaign similar to that which funded the original game was hinted at. Mike McConnell now reports that the campaign is ready to roll and will launch this upcoming Tuesday, May 13! You can check out a preview of the KS site here.

Along with a print edition, along with a "regular" and an "augmented" PDF version, the proposed stretch goals for this project includes a themed poker-deck for initiative, several rules supplements like a gazetteer and a monster manual, an introductory adventure, and a iOS/Android character creation app. I'm rather excited about this project. I own a copy of the original edition, and while FATE is a fine system, it's quite a departure from the traditional-style of role-playing that many gamers in my circle are used to. Savage Worlds has both the popularity and ease of play to introduce this rich and action-packed settings to a larger audience of players.

So this Tuesday, please help support a great project that's well worth the investment.
Posted by Mark Siefert at 12:31 AM