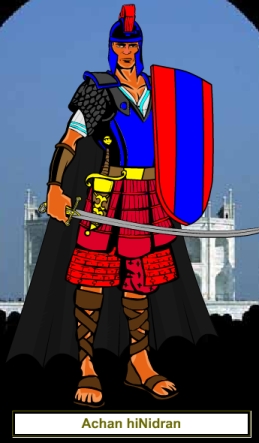 One setting I'd love to see thoroughly Savaged is Tékumel: Empire of the Petal Throne, Prof. M.A.R Barker's epic science fantasy setting. I've been working on my own conversion rules that I hope to inflict on some friends, but in the meantime I'd thought I'd create a few EPT characters to help set the mood:

Achán hiNidrán was born in in the city of Khirgár in northlands of the mighty Tsolyánu Empire. Expressing a childhood interest in soldiering and being a scion of one the highest linages of the Golden Sapphire clan, Achán was destined for to become an officer in the God Emperor's legions. As a youth, he enlisted in the regiment of his city's legion, the Legion of Gúsha the Khirgári (7th Medium Infantry) where he spent a hard boyhood learning the ways of the legionary: relaying messages, polishing armor, learning military history and tactics from the scholar priests of Lord Karakán. To this day, Achán shows a great interest and knowledge in the both topics.

When he came of age, Achán was commissioned a Heréksa (Lieutenant) and given command of a Karéng of 100 warriors. Achan served with distinction during the war with Yán Kór and the recent Tsolyáni Civil War where he achieved the rank of Kási (Captain) and placed into reserve. However, the years of battle seem to have taken their toll on the man. The Civil War has left him embittered, meloncholy, and deeply hateful toward even the most moderate worshipers of Lord Sárku , god of the undead. He has often been seen brooding alone, holding a blood-stained, scrap of blue fabric in a clenched fist. More disturbing are the nightmares that leave him sitting bolt upright on his sleeping mat calling out a woman's name: Tayaláh. For whatever reason, Achán refuses to speak about it.